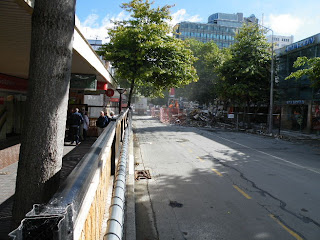 Drove from Ashburton to Christchurch on the day after the 12 month anniversary since last years earthquake. 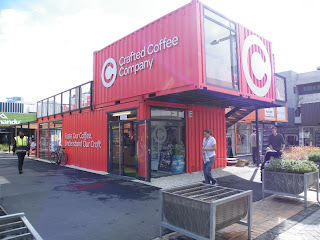 Were given a tour to the edge of the red zone in the CBD and had a look at the demolitian that is still happening. Only half of the buildings to be demolished have actually been demolished with the remainder still being assessed. 1300 out of 1600 buildings in the CBD will need to be demolished after the 6.3 earthqake.

Some of the city is back trying to function normally. Shipping containers have been reconfigured to make shopping precincts - malls and arcades, allowing some businesses to operate. It actually looks good and functions well.

Some suburbs have been so badly affected that the government will not allow people to move back home so there are a considerable number of 'homeless' people. These suburbs were on low lying swamps and affected by liquefaction so the land will need to be reclaimed.

There is a local river running through these suburbs, the surface water of which, rose 1 metre higher after the quake. It is now threatening to come over the banks and flood low lying suburbs so residential areas are in the process of being relocated.

The mood of the locals is still very sombre because there are still tremors every day with more than 3000 since last year. Most are under 4 on the Richter scale. There were 22 tremors in the time we were there, only one was big enough to feel.
We spoke to some businesses about their experiences immediately after the quake. Also talked with Sam Johnson who's just been awarded NZ Young Person of the Year. Sam is a Uni student with a remarkable story about using facebook to mobilize the volunteer support of thousands of young people who assisted emergency service workers in cleaning up the mess immediately after the quake.
Posted by Dave Reilly at 00:57