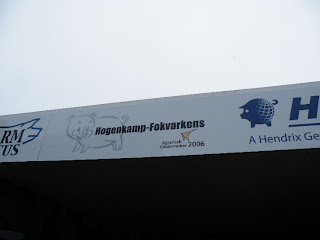 Departed from our hotel at 7am and got caught in a traffic jam. Arrived at a virtual pig enterprize 3 hours later.

We had an address from the Netherlands Minister for Agriculture who gave us an overview of the Netherlands' position with subsidies, quotas and the agricultural reform process that is underway throughout the 27 European Union member states. It was fascinating to hear the history of subsidies and quotas and where its all heading.


We heard from an OxFam rep regarding pressures on food security and living without poverty.

We also heard from an organic pig producer and then another large scale pig producer who is using technology to bring together his workforce consultancy team and customers. He also runs a pig genetics company which supplies to 40 countries.

A good day with another excellent venue and array of presenters - but we didn't front with an actual live pig all day!!
Posted by Dave Reilly at 18:50