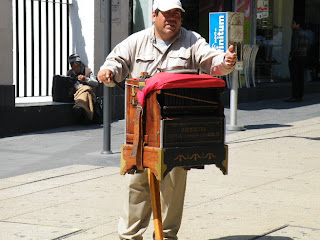 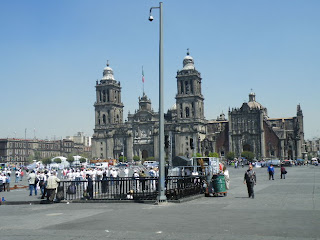 Mexio City is huge with lots of poor people but also lots of beautiful buildings and statues. It was ruled by the Spanish for 300 years until the uprising so this is very evident in the architecture.

This photo is a street scene - playing for money.

The old part of the city is built on swamp and many old buildings are moving. It is very noticable. One old church we entered which was built in the 1500's had a floor that sloped about a foot towards one end. Many of the terrifc old buildings are expected to collapse within the next 100 years. 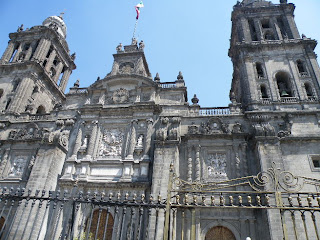 The old cathedral in the city centre is an incredible building. Its interior is decked out in religious works of art, paintings, statues and gold leaf and has a very strong sense of spirituality. As we entered the courtyard, glass panels in the pathways allowed us to look through and gain an understanding of the past. The grounds surrounding the cathedral foundations were used as burial sites and we could see human remains thought to be from human sacrificial rituals. 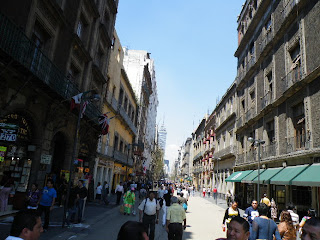 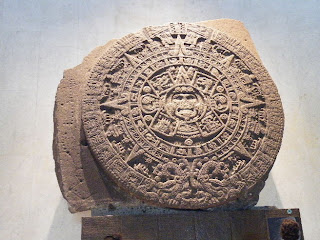 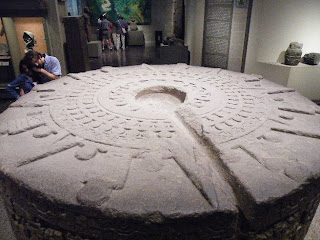 In 1790 the Aztec sun calendar stone was discovered buried 19 metres beneath the ground at the base of the cathedral. We also visited part of the national museum and could see artifacts from this ancient culture. Many had been carved from heavy stone so have been well preserved through the centuries. In ancient times human sacrifice was practised as a gift to the gods to maintain continuity of good bountiful seasons. This next photo shows a sacrifice stone.

Now its time to leave Mexico behind and fly onto our next destination Brazil. This will be the last country for our scholarship group to visit.
Posted by Dave Reilly at 05:12