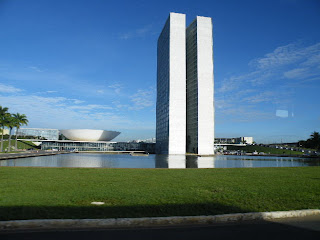 Woke up in Brasilia - the political capital of Brazil, much like what Canberra is to Australia. The capital used to be in Rio de Janeiro until a decision in the 1960’s to construct a purpose built city. World famous architect Oscar Niemeyer who was “inspired by the curves of a woman's body,” designed a collection of attractive buildings. Brasilia is neat and tidy, modern and captivating. The capital is home to 2 million Brazilians. 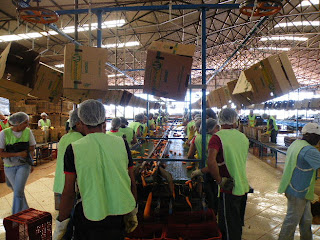 We boarded our bus for a 5 day trek towards San Paulo where our Brazilian adventure concludes. The first stop today is Goitas Savannah to inspect a large scale horticulture property.This business specializes in large production of carrots, potatoes, onions, garlic, plus grains such as soya beans, corn, edible beans and wheat. This photo is of a carrot packing plant. 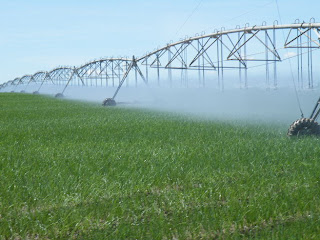 This business supplies a high percentage of the federal capital’s needs but does export some lines in some years. They have established their own tissue culture lab to propagate their garlic and potato seed requirements. 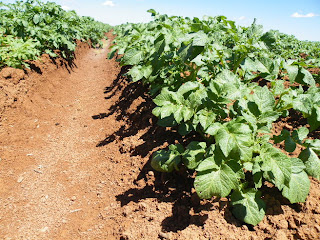 Some of their production yields are 60t/ha for potatoes (this photo) and up to 20 t/ha on garlic.

This property owns/rents around 12,000 ha and has 26 pivot irrigation systems. 20% of the farm has been set aside for native vegetation purposes. More than 500,000 native trees have been planted. 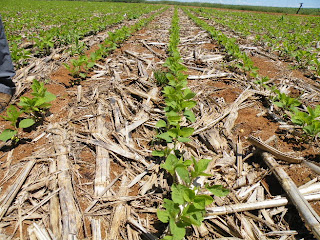 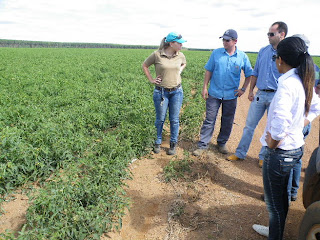 Next stop was another large horticulture farm. This place grows soya bean, cotton, potatoes, tomatoes and pumpkins. This visit really spelled out how incredibly productive this country is. For example the climate is suitable for production of all these major crops all year round.  This photo - tomatoes. 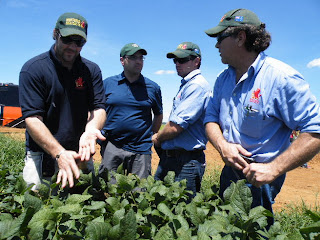 With 1500 mm plus rainfall there is enough soil moisture to grow 2 crops on the same land per year. When irrigation is available, yield increase is significant and some farmers who use careful crop rotations can get as many as 3 crops from the same ground in a year. Amazing!!!  This photo - soya beans.
At this farm we looked at soya bean which was ready for harvest. Alongside was soya bean at flowering stage and alongside this, newly emerged soya bean. This allows for a staggered harvest and product supply advantages. The same staggered planting times were being applied for the tomatoes.
Special note about Soya bean.
Soya bean is a super food it contains 40% protein and 20% oil. It is used for human consumption and commonly used in livestock feed. Regardless of the country we have visited, it seems to be widely adapted to a range of climates and most favoured by farmers. 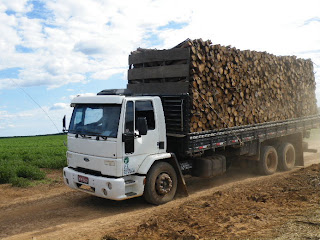 I was surprised to see lots of Eucalypt wood lots. These trees seem to have adapted particularly well, thriving in this high rainfall environment. The farm manager informed our group that a stand of trees which were approx. 15-20 metres high planted at thick density was only 5 years old. These eucalypts are harvested, wood chipped and used for industry eg. heat for grain drying. 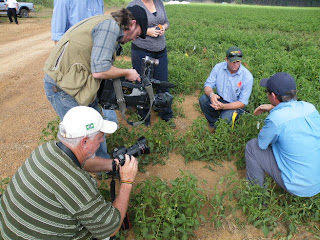 A film crew from national Brazilian TV plus print media, followed us for the day. I was interviewed.
Our journey continued for several more hours until we lodged at Cristalina for the night.
Posted by Dave Reilly at 19:03